11th October 2007, I was walking back home past Charing Cross Hospital when I saw a Peregrine Falcon fly right above me and then perch on the hospital. I had been dreaming of this and could hardly believe my eyes so rushed back home to get my camera. I didn’t know then that it was here to stay and wanted proof of what my eyes were seeing. 15 April, she laid her second egg:

18 April, she laid her third and final egg: 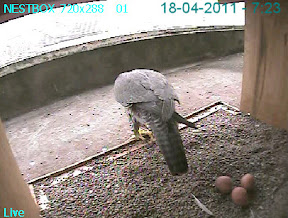 19 May, around 6am, the first chick hatched: then around 11am, the second one hatched: Finally, on 20 at 18.45, the third chick hatched, and already had a bit of catching up to do, they grow very quickly at that age and the size difference was quite noticeable for a few days. MrC provided very well for the whole family, bringing the occasional Parakeet and a bit of bright colour from time to time, and all 3 chicks grew into juveniles ready to fledge without problem.

We were preparing for fledging time, in particular we were putting the final touches to a notice to put around the hospital in case one the juveniles got grounded on one of their first flights. (ref to LPP page), when I had a call from Chris informing me that builders on the ground had one of our juveniles in the courtyard they were working in! While waiting for Dave to come and check it and bring it to the roof if possible, I checked the cctv and noticed that a second one had fallen off the ledge too. With Chris and the hospital security we looked for it but couldn’t find it. For the story of the rescues of both juveniles check the following blog posts. A few days later, the third chick fledged accidentally, full story is here.
All through summer, they practiced flying, hunting and then one by one all flew away. One, the one that had been rescued first, did return and was around with Charlie for most of September.

This is Indy in Richmond Park! This was taken by Warren Richardson on Wednesday. He has more pictures on his Instagram account: https://www.instagram.com/testtube29/ Go and check them, they're great shots. And it confirms she can hunt for herself :)Warren says that he saw her there on Wednesday morning and early afternoon, and again on Friday. She was back at the hospital on Wednesday night but I haven't seen her since then. There has been some disturbance at the hospital this weekend so we didn't get so see much of the adults either.Keep your eyes peeled if you're in Richmond Park, you never know, she may still be there! ... See MoreSee Less

Something I haven't seen for quite some time! That answers the question I get sometimes: "Are the parents still feeding Indy?" ... See MoreSee Less

Previously, Azina had spent around 8 1/2 hours in the same spot under the camera. ... See MoreSee Less

Very exciting Peregrine Watch this evening involving a young Kestrel and Tom attacking Indy (again). Thankfully Indy can fly now and could sustain the attack. We think that Tom got pumped up when he saw the Kestrel and transferred his aggression to Indy once the Kestrel had gone. Unfortunately, as it all happened very quickly and some of it on the other side of the hospital from us, we can only speculate. It was all fantastic to see nevertheless. Before that the Kestrel had slightly mobbed Azina on the ledge... ... See MoreSee Less

The whole family briefly on the ledge this morning. I don't think Tom and Azina liked Indy's intervention much 😉We also had all three yesterday evening for Peregrine Watch. ... See MoreSee Less

Mother and daughter.Two shots I took this morning of Indy and Azina, about one hour apart, with them in very similar poses. ❤️ ... See MoreSee Less

A few minutes with Azina on the ledge this afternoon. She was looking very alert. ... See MoreSee Less

Amazing Peregrine Watch this evening. Friday night had also been good with Indy chasing Azina but this evening topped it. It started quite calmly with both parents on the hospital and Indy eating on one of the cranes. Indy went and bumped Azina off her perch and tried to chase her but Azina wasn't cooperating really. Indy did a bit more flying around the hospital then went soaring by the cranes for a while before diving back to one of them.Around 7:50 I spotted a pair of Little Egrets flying, quite low, between the cemetery and the cranes. Suddenly Sarah, who was looking Indy, said that she'd moved and at the same time I saw the egrets do a 90 degree dive and all the birds disappeared from view behind the rooftops. We then saw one of the egrets reappear and fly over the cemetery to our right and Indy just above the roofs of the houses by the cemetery to our left. Utterly crazy! Indy then flew back to the crane and that's where we left her as the cemetery was closing. We had to pinch ourselves that we'd seen what we'd seen. A bit like when Jack attacked a Cormorant two years ago, but crazier. ... See MoreSee Less

Indy visited the ledge a couple of times this afternoon. On one of them she grabbed a Parakeet from the cache. ... See MoreSee Less